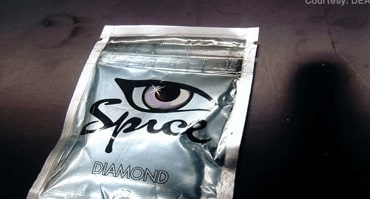 Be on alert there are reports in both the media and to poison centers, of what appears to be an emerging drug of abuse. Often patients are calling the substance “synthetic marijuana.”. No one, however, positively has identified the actual chemical involved in these exposures. Calls to some of the nation’s regional poison centers have increased dramatically since the beginning of the year.

The term “synthetic marijuana” is being used because most of the patients have claimed that they thought they were using a form of marijuana, some even using the terms Plutonium, K2, Spice, Pot Pouri, Crank Weed, or Bermuda Triangle.

The spraying of synthetic cannabinoids onto a blend of spices is what led to the increased calls to poison centers resulting in the synthetic cannabinoid abuse in 2010-2013 which seemed to have terminated when these substances were classified under the Controlled Substances Act as illegal.

Calls to the Missouri Poison Center in April 2015 are demonstrating two variations of clinical effects. One is of extreme agitation with hypertension, tachycardia, leading to seizures, and other end organ damage such as acute kidney injury, on the other extreme there appears to be a “quiet” variety with lethargy, drowsiness, bradycardia, and hypotension leading even to coma, respiratory arrest and the need for respiratory support.

WHAT SHOULD YOU DO IF SOMEONE PRESENTS TO YOUR EMERGENCY DEPARTMENT WHO HAS USED SYNTHETIC MARIJUANA?

Call the Missouri Poison Center. Our specially trained nurses, pharmacists, and toxicologist can provide you with the most up to date treatment advice and trends reported in our state.