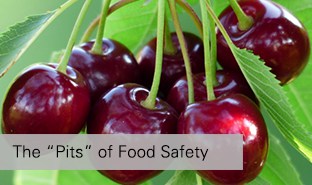 You may have known certain fruit pits and seeds contain a form of cyanide, but could someone really have a toxicity from eating them? A recent news story about cherry pits has brought concern to the public. A man reportedly ate three cherry pits and was hospitalized for cyanide poisoning. He apparently cracked open the pit and ate the seed inside. While this is extremely rare and unlikely to occur from an exposure like this, cherry pits do contain a small amount of a toxic substance. Keep reading to learn more!

Does this ever happen at the poison center?

The Missouri Poison Center occasionally receives calls about cherry pits, and most often, they are not alarming. We recently managed an exposure involving a teenager who made a fruit smoothie with a blender.  The teen used fresh cherries and thought she had removed all of the pits, but when drinking the smoothie she could feel grittiness in her mouth.  She told her mother who immediately called the Poison Help line to ask what could happen if cherry pits were accidentally swallowed.

When calling the poison center, a specially trained registered nurse or pharmacist answers your call.  They quickly make a risk assessment, then provide advice to the caller.  In this case, the cherry pit does contain a toxin called a cyanogenic glycoside; however, accidentally eating several seeds or pits will not result in cyanide toxicity. The case in the news mentioned above is a rare exception.

What is in the cherry pit?

Cyanogenic glycosides are naturally occurring chemicals found in many fruit pits or seeds that can release small amounts of cyanide as the body metabolizes (or processes) them.  Seeds or pits from fruits such as apples, pears, apricots, peaches, nectarines, plums, and others, contain this cyanide-like compound.  Nature builds in some safety for accidental ingestions of fruit seeds and pits as they must be chewed before being swallowed in order for the cyanogenic glycoside to be released.  The concentration of the toxin is so low that the amount available in a normal serving does not usually pose a risk for toxicity. So, freely enjoy your favorite fruit or indulge in a fruit smoothie without worry about accidental ingestion of a seed or pit!