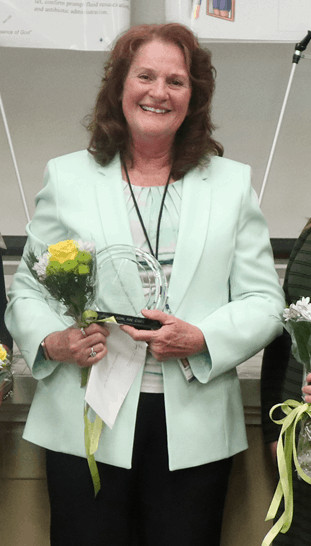 These awards are named for Nancy Fedak Ross, who years ago began work at SSM Health Cardinal Glennon on 2 South, which was then a burn unit. Her love for children was evident during her time here and she continues to support a variety of children’s causes throughout her post-Glennon life.

Exceptional Nurse of the Year

Exceptional Nurse Award nominees must consistently demonstrate behaviors that take nursing care from special to exceptional. This may include a practice demonstrating improvement and patient and family care, inspiring methods of relating to patients or showing an improvement in clinical outcomes. This is the nurse that always wows, who exemplifies excellence, who takes nursing practice and the care of children and families to a new level.

Rosanna, a team member at the Missouri Poison Center, was recently honored with this award. On May 10, the day of the ceremony, Rosanna celebrated 44 years at Cardinal Glennon. As a child, Rosanna spent many years as a patient here, giving her the perspective of both patient and caregiver.  Inspired by the sisters caring for her, she told them she wanted to be a nurse, and in turn was told “I hope you come back and work for us someday.”  In 1975 she came to the Emergency Department as a student, continued in the department as a staff nurse, and eventually became Head Nurse. She then moved to a staff nurse position in the Ambulatory Care Clinics, taking a particular interest in the orthopedics, spine, and cerebral palsy clinics.  Currently she is a highly valued member of the team at the Poison Control Center.  Wherever Rosanna has worked she has been a teacher and mentor to patients and families, new and seasoned nurses, medical students, residents, and pharmacists.  In addition to the depth of knowledge she displays in her work, she brings joy and enthusiasm.

In 2018, Rosanna was a St. Louis Magazine Nursing excellence finalist and a nominee for the Ambassador Choice Award for Patient Care Excellence and Lifetime Achievement. She was part of the team at the Poison Control Center who received the Exceptional Patient Care Team Award.

Outside of Glennon Rosanna gives back to the community, family , and friends.  She has a certified therapy dog, Levi.  The two of them make weekly trips to Mercy Jefferson Behavioral Health Unit and the Jefferson county Juvenile Detention Center.