Calls to the poison center regarding insect bites are a common occurrence and rarely result in harmful symptoms. Most often the poison specialists are called about red bumps that vary in size and appearance. Effects from these bites range from having no symptoms to stinging, swelling, itching, redness, and possible blistering at the bite site.

Summer is here, just like last year the Zika virus is a concern. The best way to avoid being infected with Zika is to avoid mosquito bites…no easy task, but there are some steps you can take to minimize the chance of being bitten.

Insect repellants can help prevent insect bites when used properly. Use only EPA registered repellants, read the product label before use and follow the directions. Click the image below for helpful tips about insect repellants.

Most of the snakes found in Missouri are harmless, and are actually very good for the environment, but there are five species which are venomous. Venomous and poisonous are oftentimes interchanged when talking about snakes with venom. Venomous is the more precise term, while poisonous is the more general word indicating that the venom can be harmful to a person. The copperhead is the most common venomous snake in Missouri followed by the cottonmouth, and three different rattlesnakes. If you suspect you have a snakebite it is IMPORTANT to call the Missouri Poison Center at 1-800-222-1222, every case needs individual attention.

For more information, click the image below for tips on how to prevent snakebites and what to do if someone is bitten by a snake.

There are two species of venomous spiders in Missouri, the Black Widow and the Brown Recluse.

If you suspect you have a spider bite it is IMPORTANT to call the Missouri Poison Center at 1-800-222-1222, every case needs individual attention. 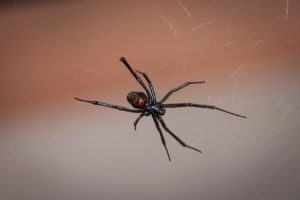 The body of a black widow spider is black and shiny, with a characteristic red hourglass mark found on the underside of the abdomen. The black widow is shy, with its active time being at night. It lives in places where it can be left undisturbed, such as in piles of trash, under rocks, and in rarely used crawl spaces of rooms like cellars and basements. Bites usually happen when a person comes in contact with the black widow’s web, or when the spider becomes pinned against the skin. While a bite from a male black widow is considered harmless, the bite of a female black widow is venomous. The venom of the black widow causes severe pain in the area of the bite, and symptoms progress to include dizziness, nausea, blurred vision and difficulty breathing. Although the black widow has a bad reputation from the symptoms it can cause, fatalities from a bite are rare and recovery usually happens quickly with no long term health consequences. 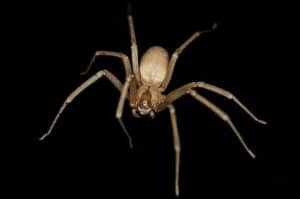 The brown recluse spider is commonly referred to as a “fiddle-back” due to the characteristic fiddle-shaped pattern found on the top area of the spider. However, this marking is found on many spiders and does not definitively identify a brown recluse. The presence of 3 pairs of eyes forming a semicircle positively identifies the brown recluse. The color of the spider ranges from a light tan to brown. It avoids open spaces, preferring secluded areas where it can build its web in hidden places behind objects. Out of sight should not mean out of mind. Most encounters with the brown recluse occur at night, when the brown recluse is most active and foraging for food. Other common encounters occur when the spider’s “hiding place” is inadvertently uncovered, such as in seldom-used clothing or blankets.

In order for this spider to bite a person there has to be counter-pressure, this kind of pressure typically happens when the spider is trapped against the skin. The reaction to a bite depends on the individual’s sensitivity to the venom. When a person is bit there might be an initial stinging sensation, but usually the bite goes unnoticed. Most often there is only one bite, which becomes evident within a few hours with an early central blister and a surrounding halo of inflammation. There can be significant pain and bruising with swelling and induration (a hard knot develops). The degree of the skin reaction can range from mild, where the area of affected tissue is less than a size of a dime, to significant where the affected tissue covers a large area. The center area can become necrotic (the tissue dies) turning a dark blue or gray color and this skin will eventually slough off. On rare occasions, the venom from a brown recluse can also cause a “systemic response” (causing symptoms throughout the body). The symptoms associated with this reaction include lower back pain, difficulty urinating, dark colored urine and a red rash all over the body. Prompt medical attention is needed if any of the systemic symptoms occur. In general, healing from a brown recluse bite is slow, taking six to eight weeks or longer, and during this time the injured tissue can easily become infected.

For any spider bite, to prevent infection, keep the bite site clean and dry and apply a topical antibiotic. It is not recommended to apply ice to spider bites, but a topical hydrocortisone cream can be applied to soothe the area and reduce itching. 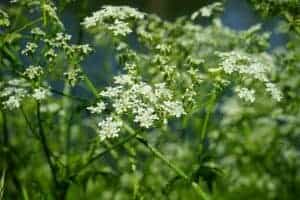 Poison Hemlock is common in the state of Missouri, growing wild along the side of dry roads and in pastures. This plant’s fern like leaves and tap root look very similar to that of a carrot or a parsnip. Mistaken identity can lead to serious symptoms if any part of poison hemlock is eaten. Within a short time after eating, nausea, dizziness, blurred vision, and muscle weakness can develop. Rapidly progressing weakness can lead to paralysis and respiratory failure. Although there is the possibility for serious symptoms associated with eating poison hemlock, it is a rare poisoning and there have been no human deaths in the United States from poison hemlock over the past 10 years.

Rhubarb is known by many as their “favorite pie plant”, but there is some confusion surrounding the plant. While one family member looks forward to a piece of rhubarb pie, there is another one talking about it being poisonous. 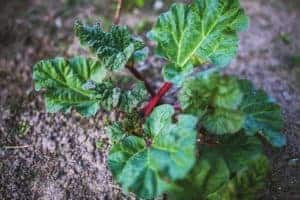 How can it be a favorite of pie lovers, yet poisonous at the same time? The answer: the leaf blades of the plant contain a toxic substance (soluble oxalates), while the stalk of rhubarb is edible. Biting into the leaf brings a tart or sharp taste and a grainy sensation to the teeth. Sometimes there is minor irritation to the mouth and tongue. More serious symptoms are rare, because there has to be a massive amount of plant material ingested. For instance, a serving size of leafy vegetables for an adult is about 4 ounces, while a toxic amount of rhubarb leaves is about 5 times that amount. That means it would take about 20 ounces of raw rhubarb leaves for stomach upset to occur. Massive amounts (greater than 20 ounces) can cause serious symptoms such as prolonged vomiting and diarrhea, muscle stiffness, abnormal heart rhythm, kidney injury and seizures.

So go ahead and enjoy that slice of rhubarb pie without worry, and if you are tempted to eat a rhubarb leaf, as in all things, moderation is key.

Tomatoes are one of nature’s best summertime gifts. They are delicious to eat and boast many health benefits, but there is always that lingering question, “Are tomatoes poisonous?”

All parts of the tomato plant contain solanine, and therefore have the potential to be ‘poisonous’. The leaves and stalks of a tomato plant, along with unripe green tomatoes, contain solanine, while the ripe red tomato does not. Poisonings from the tomato plant are not common because people do not usually eat the stalks and leaves of the plant. Occasionally, people will eat the unripe green tomato, but usually not in amounts that can cause serious symptoms.

The takeaway point: use moderation when eating unripe green tomatoes, but enjoy the ripe red tomatoes to your heart’s content. 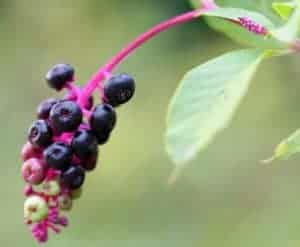 American Pokeweed is native to Missouri. The plant first sprouts in the early spring and as it grows or matures, its toxicity increases. During late spring or early summer the plant will grow berries in clusters, which appear grape-like especially to small children. The color of the berries change as they mature, starting out red, changing over to purple, and by fall they appear very dark, shiny and black.

All parts of the plant are potentially toxic, however the root of the pokeweed is the most toxic; toxicity decreases as it grows further away from the root. In spite of pokeweed being a poisonous plant, the leaves are still sometimes used to make “pokeweed salad”. While this is not recommended, it is a tradition that is passed from generation to generation in families. Preparation of the leaves and meticulous cooking steps need to be followed in order to remove the toxin from the leaves. Even with the most cautious of cooking, the elderly, the immunocompromised, young children and pregnant women are more at risk for poisoning and should never consume the salad or any part of the plant.

The symptoms of pokeweed poisoning will vary depending on the amount of pokeweed ingested and the time of the year (since toxicity increases as the plant matures). Symptoms of vomiting and diarrhea will occur with mild poisonings, which will usually resolve within 24-48 hours with no medical treatment needed. When large amounts of pokeweed have been ingested, or proper preparation has not been done, a more serious poisoning can occur. Symptoms include intense vomiting, abdominal cramping, frothy diarrhea and gastric bleeding. These poisonings require medical evaluation and treatment in a hospital.

If you have any questions about poisonings, call the Missouri Poison Center at 1-800-222-1222. The poison center is open all day, every day for poisoning emergencies and questions.