New and Re-emerging Trends to “Get High” 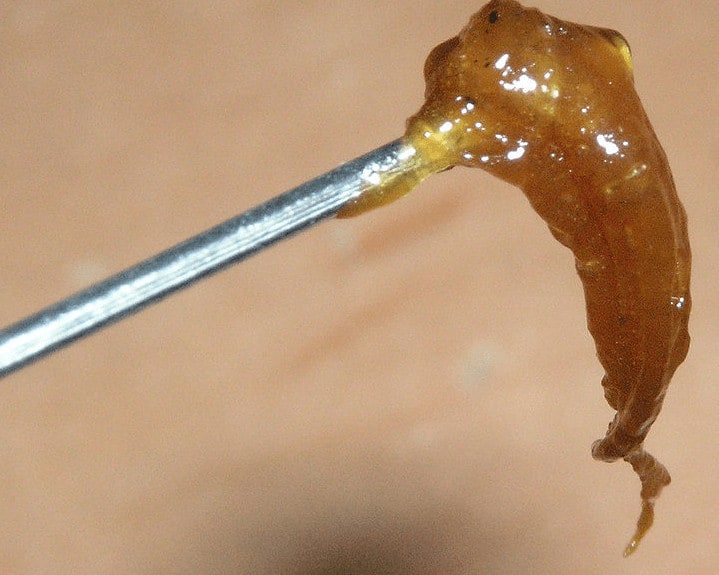 The Buzz about Honey Oil and Wax

A man enveloped in flames emerges from a hotel room after an explosion blows out windows and one of the walls. An 18 inch section of PVC pipe stuffed with ground marijuana and a can of butane are left behind…

A re-emerging trend from the late 1970s involves the production of a super potent form of THC utilizing normally discarded Cannabis plant matter such as stems, seeds, and trimmings. The process involves an industrial extraction method known as Supercritical Fluid Extraction which utilizes butane to extract the THC. Popular names for the end product are “Honey Oil”, “Wax”, “Ear Wax”, “Shatter”, and ”Butane Hash Oil” (BHO). Its recent growth in popularity is fueled by the fact that it has very little odor in either solid form or when vaporized, it is highly portable, and it can produce intense “highs” with small amounts of product. Although potency of cannabis plant material continues to increase (~4% in 1995 to ~12% in 2014), this form of THC remains the most potent. It is purported to be 80% pure THC making it the most powerful concentrate available.

Honey Oil and Wax appear as their names suggest. They have a pale, glistening golden hue which mimics honey or ear wax once the butane has evaporated from the extract. Honey oil extraction requires easily secured, everyday items from camping supply and hardware stores. The process involves the use of an 18 inch section of PVC pipe with end caps (or a stainless steel turkey baster) which is packed with ground marijuana plant material. The tip of a butane canister is inserted into a hole drilled into one of the end caps and the contents of the canister are discharged until empty. The opposite end cap, having been pre-drilled with tiny holes to mimic a pepper shaker, drains the mucky liquid into a beaker or Pyrex® dish. This liquid becomes the honey oil once the butane has evaporated. Interestingly, the butane selectively extracts the most desirable fraction of cannabis oil, while leaving the undesirable chlorophyll, waxes, and vegetative oils behind in the plant matter. The highly volatile butane poses the greatest danger because it is very flammable and explosive owing to its ultra-low boiling properties. Some DEA reports of house fires, explosions, and burn injuries that are traditionally associated with the manufacturing of meth have more recently been attributed to honey oil operations.

YouTube videos and DIY forum threads that outline the procedures for the construction of honey oil extractors and the process of extraction often spread misinformation and fail to stress the hazards of butane. For a quick “trip” through construction of an extractor and the extracting process please view these YouTube videos:

Delivery of the “high” associated with honey oil and ear wax involves heating up a glass tube and touching it to the product and inhaling the vapor. Other accounts detail applying the wax on a coin and heating the coin to vaporize it. A single puff is purportedly equal to an entire joint.

The New Faces of Fentanyl

Since 2013, there have been an increase in reports of overdose due to the synthetic opioid, fentanyl and its analog acetyl-fentanyl.

Acetyl fentanyl is NOT available as a prescription drug in the US. It is previously undocumented in illicit drug use and is purported to be five to 15 times more potent than heroin. In a CDC Health Advisory distributed on June 20, 2013, the CDC recommends screening for fentanyl by ELISA to improve the detection of fentanyl-related overdose deaths. The CDC strongly encourages confirmatory CG/MS testing to determine if a suspected fentanyl overdose is caused by fentanyl, acetyl fentanyl, or another fentanyl analog. GC/MS that test positive for acetyl fentanyl show a distinct chromatographic peak with a mass spectrum consistent with acetyl fentanyl or 4-Anilino-n-phenethylpiperdine (ANPP), a compound believed to be a precursor to acetyl fentanyl.

The CDC encourages emergency departments and emergency response teams to exercise increased vigilance in promptly identifying suspected opioid overdose patients. Acetyl fentanyl, as a synthetic opioid, is believed to respond to naloxone. Due to the higher potency of fentanyl and acetyl fentanyl as compared to heroin, larger doses of naloxone may be required to reverse opioid-induced respiratory depression.  Due to the potential need for larger doses of naloxone to reverse these potent fentanyl analogues, health care facilities should check their supplies of naloxone to ensure adequate stores of antidote.

Images of seized desmethyl fentanyl tablets bear imprints such as the FacebookTM logo to heighten appeal to young people.

The Missouri Poison Center stands ready 24/7 to respond to your questions concerning laboratory testing and treatment for these newly recognized trends in drug abuse. Together we can make a difference!  Specially-trained and experienced health care professionals are just a phone call away at 1-800-222-1222.